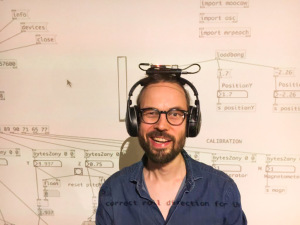 I'm a sound designer and musician living in Helsinki, Finland. I specialise in immersive and interactive projects: XR experiences (AR and VR), games, installations and live performances where the audience shares the feeling of presence and becomes a part of the illusion − or reality if that's the aim.

I have a background in music playing cello, trumpet and various keyboard instruments somewhat purposefully for the most part of my life in a number of ensembles. I've also played other instruments, such as theremin and accordion, more as a hobby. On the side, I've done quite a lot of sound engineering stuff.

After getting my master's degree in music, I worked as music teacher and teacher in sound engineering for about 10 years. During that time, I got to work with awesome and inspirational students, got exposed to more musical genres than I knew that exist, spent countless nights writing arrangements for the most unconventional ensembles, and got to live through dozens of spectacular productions.

For a few years ago, I did a career switch and since have been working full-time as a sound designer and composer mainly in immersive and interactive projects. Currently, my main venture is 'Full-AAR' at WHS where we test artistic and technical approaches to the narrative use of audio augmented reality (AAR) with six-degrees-of-freedom (6DoF). I'm also putting in time on my own game company Mindhaven Games, working with our own video game title 'Sky Beneath' as well as subcontracting on other projects such as three experimental and cool VR productions 'Love Simulation EVE', 'Emotive VR', and 'State of Darkness II'.

Sound Designer and Composer, since 2016

Musician and Sound Technician, since 1994